Hair is a filamentous, usually pigmented outgrowth from the skin found only on mammals. Hair can be found on all areas of the skin except the lips, fingertips, palms, soles, glans penis and labia minora). These thin strands grown from hair follicles in the deeper portion of the skin (dermis) and protrude the outer skin layer (epidermis). Each fiber is composed of non-living cells primarily made of the protein keratin.

Humans have about 5 million hair follicles over their body with approximately 100,000 on their scalp. (approximately 130 scalp hair follicles per cm2). This equates to about 300 – 500 hair shafts per cm2. Each follicle can grow about 20 individual hairs over one’s lifetime.1 The average daily hair loss is about 100 strands.

A hair follicle is a cavity in the skin which contains the root of a hair (see photo). At the base of the follicle is the papilla, which is made of connective tissue and small blood vessels. Around the papilla is the hair matrix which are a collection of epithelial cells and interspersed melanocytes. Cell division within the matrix results in formation of the hair fiber. The hair matrix epithelium is one of the fastest growing cell populations in the body. Therefore, some forms of chemotherapy and radiation therapy which kill rapidly dividing cells can lead to temporary baldness. 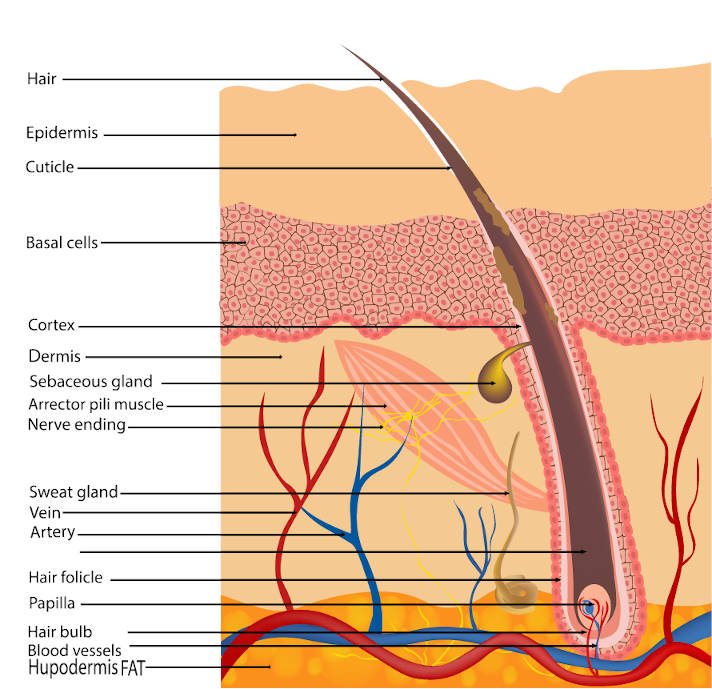